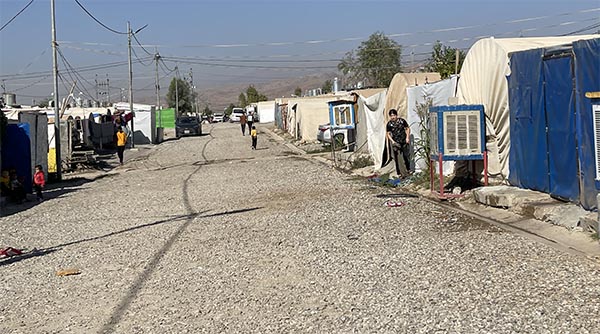 Sitting on the cement floor of a refugee’s temporary shelter that has been their home for five years is a challenging experience all the way around. But hearing two brothers share their faith in Christ, their joy in the midst of hardship and persecution, and their confidence in the Lord’s grace and provision is beyond a blessing.

I met Rashid* and Abdul* (not their real names) the first day they came to attend the first class for Indigenous Ministries new Middle East Theological College in Iraq (more about that in an upcoming Liaison). They were not just faithful students, they were enthusiastic. Rashid’s limited education and reading skills did not keep this oral learner from taking everything in. The brothers attended both classes, and asked us to visit their home in a refugee camp. I’m so glad we did.

These two brothers, along with two others, came to Christ out of the majority religion, one by one. They have lived in a refugee camp for five years; their homes were taken by ISIS and then destroyed as coalition forces were retaking their city. They have nothing to go back to but rubble, and the government is closing their camp at the end of the year. You would think their attitudes would be as bleak as their prospects. But I have never seen more joy in the Lord than I did in their home. These men are reaching out to their neighbors, sharing resources that are scarce because “it is what Jesus would do.” They tell of persecution, a son being attacked, left for dead, and raised up through prayer.

Their neighbors don’t sympathize with their faith, but come to them for prayer because they see that Jesus answers them. They’ve lost homes, lost jobs because of their faith, and have no money to find a new place here. And yet they know the Lord will provide as he has over these past few years. Sitting on a floor with offered sweets and drinks, I couldn’t help thinking how their faith and joy was so powerful in the midst of such difficulty. Teaching these two men and their classmates has been as great a privilege as I could imagine in ministry.

Ministry Opportunities
Contact our office for more information and to apply at (719) 302-3028.
If you are looking for VBS or AWANA projects, we have them!
Prayer RequestsIndigenous Ministries 2021 Impact in Numbers
Scroll to top