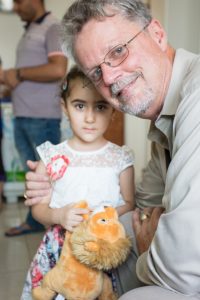 John Cook, left, was thrilled to be able to give out the first 37 kits to refugee children and our national teams in

Iraq this month. The response was overwhelmingly positive!!! We’ve been asked for 10,000 kits by our teams and refugee camp leadership. This kit helps children unpack their trauma so they can begin to heal.

A very soft 18” stuffed animal (varies depending on supplies: lion, bear or tiger) with a chest pocket for the audio player
Solar audio player with two tracks, first, for the children, Bible stories set to music with the Gospel, and for the adults, the Bible in Arabic and English
A booklet called “The Survivors” in Arabic to help children process the PTSD they’ve experienced; written by a team of professional psychologists and counselors from a Biblical perspective on feelings trauma has brought, along with practical helps.  Another plush toy and candy for every child in the family so no one is left out. 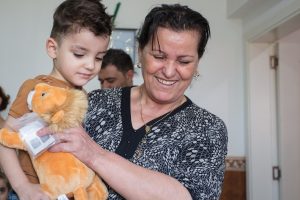 Mother and her son receiving the kit

Bring comfort and joy to these children for years to come! Donate online on our website; you won’t miss it in the dropdown menu. This is a wonderful, practical way to make a BIG difference in a child’s life! 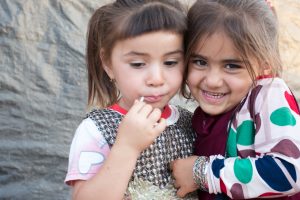 Psalm 82:3 “Defend the weak and the fatherless; uphold the cause of the poor and the oppressed.”

For many Americans, this month’s headlines announcing Iraq and coalition forces’ victory over ISIS in Mosul was a grim reminder of the war in Iraq. While many have assumed the worst is over, stark evidence points to a lingering and unsettling truth. With massive areas of Mosul uninhabitable, the rebuilding and resettlement will take time, resources and courage. Refugees have tough decisions to make. Officials estimate only 40-50% will go back to their homes, 15-25% will emigrate out of the country and the rest will settle in areas of Kurdistan. With an economy devastated by decades of war and recent plummeting oil prices, refugees struggle to find normalcy.

Almost 1 million refugees left Mosul since the offensive to recapture Mosul began in October 2016, bringing the number to 3.2 to 3.4 million displaced Iraqis. Whatever your thoughts are about this crisis, would you pray for us and the national Believers on the front lines? If you feel led to help, give as generously as you can, and we will continue to ask the Lord to multiply the resources to help refugees. To donate click the Donate Button on the right and select Iraq Relief  in the drop down menu.

John and our team were passing through an area in Northern Iraq earlier this month, when they were alerted to a need in a refugee camp with 44 families. They had gone seven days with no fresh drinking water. All baths had long been suspended, toilets overflowed and the situation was dire. What a joy to be able to meet this need as a result of your generous donations. We have a new relationship with the leaders of this camp (Yazidi, Muslims and Christians live in one camp which is an unusual grouping), and our team there will be monitoring this situation for more solutions. Thank you. 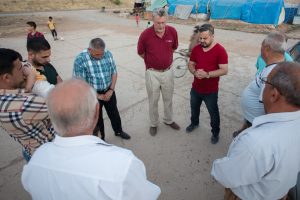 John prays as Wesam, IM national team member, translates to the leaders of the refugee camp

Silam’s family:  Silam lives with her 84 year old mother. Silam, 57, previously lost her husband who was killed in the eight year war between Iran and Iraq. Her sister, Basma, 54, has two daughters, twelve year old Mariam, and a younger daughter who was kidnapped by ISIS three years ago.  When ISIS entered into their area in Mosul, people started to flee, but they didn’t realize how horrible the threat was, so they stayed in their area until ISIS was there. They not only beat and burned them, but also forced them to become Muslims. They have endured a lot of mental trauma (PTSD). Miraculously, and on a good note, Basma was reunited with her now nine year old daughter in Erbil recently.  Your donations to the Iraq Relief Project have helped this family with clothing and food.

Another family from Keramleis was captured by ISIS, and beaten.  They watched as ISIS burned their home, and the father was so severely beaten he now cannot function and work.  We are helping with food, clothing and medical attention.

Other families who have very recently been freed from ISIS, are now in refugee camps and are being helped with much needed clothing, shoes and food as needed. We are assisting families with vital monthly prescriptions and helping families with counseling as well.

English Classes For Yazidi Women from John Cook on Vimeo.

The Church’s Ministry to Refugee Children. from John Cook on Vimeo.

IM Partners with Biblica from John Cook on Vimeo.

The overwhelming response most of us have to what’s happening in the Middle East is, “I’m just thankful it’s there and not here, and besides, this crisis is too huge; anything I do won’t matter!” While this is, at first glance, a normal response, the fact is, we as Christians have seven reasons to care:

Disturbing facts: There are 3.4 million displaced Iraqis (refugees) and 6 million displaced Syrians within their own borders, and this crisis isn’t going anywhere. This doesn’t take into account refugees scattered world-wide. Although estimates vary on exact numbers, this humanitarian crisis presents Believers with unprecedented opportunities. So, why and how exactly, SHOULD we as the Body of Christ care? 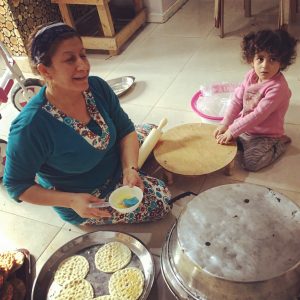 A woman and her toddler making bread in a refugee camp. This is her small business; she sells the delicious bread to help her family. Indigenous Ministries has helped her and many of the families in this camp get on their feet.

We cannot out-give God; trust Him to meet needs as you pray for and help the refugees through the national Church. Our teams visit refugee camps and give out food and supplies as we are able to send resources. Donate online. Thank you on behalf of those who can’t say it to you.

Ladies – check out these great ways to help women!

English classes in Iraq – We’re starting these classes with 100 Yazidi widows in northern Iraq, and $75 provides English classes and counseling for one widow. Thank you for your prayers as our team shares hope in Christ with them!!

Fall 2017 & Winter 2018 Women’s Conferences – We’re gearing up for our annual meetings which build into the lives of leaders who in turn affect the lives of thousands of women. Upcoming meetings will be in The Philippines, Egypt, Iraq and India. 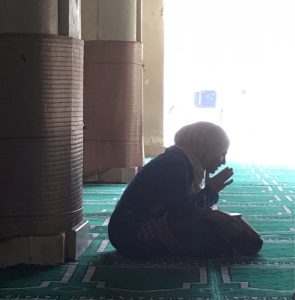 Woman praying in a Mosque in Cairo

Here are four easy ways to get involved and help: