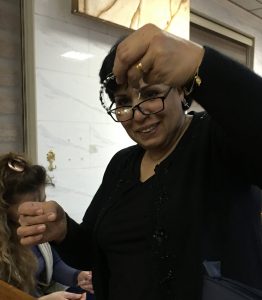 I will be leading women’s conferences in India, Egypt and Iraq in February and March. Each conference provides an opportunity for education, encouragement, fellowship and creativity. Special craft kits, which the women really enjoy, have been assembled that will provide a meaningful memento of the event.

For the first time, we are making these kits available so you can experience the joy of crafting and participate with the women in thought and prayer. For a donation of $25 or more, you  receive a kit, just like the ones being made across the globe. Quantities are limited.

Thank you for your continued prayers and gifts. Please visit our new website, BeautifulInternational.org, for more information. We would be honored for you to join us and become a vital Beautiful Partner in 2017 with your prayers and financial gifts.

There is an urgent need for child sponsors. For just $35/month or $420/year, you can bring love, joy and hope to a precious child across the globe.

Below are two children in our Egypt program we’d like to introduce. Please prayerfully consider blessing one or more needy children with hope and eternal life in Christ. To sponsor a child, click the Donate Button on the right and choose “Child Sponsorships” in the dropdown menu. 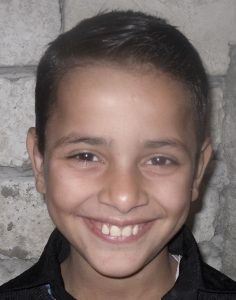 Youssef is nine years old and lives at home with his widowed mother and two sisters. He is hard-working and enjoys reading, music and playing. His best subject is reading/writing. Youssef’s favorite verse is Psalm 23:1. He would like to be a doctor.

Mariam lives with her mother, two brothers and three sisters. Her mother is a widow and unemployed. Mariam is hard-working and her best subject is social studies. She has an ongoing minor heart problem. When she grows up, she would like to be teacher.

Thank you for your continued prayers and financial gifts to Beautiful International. Please visit our new website, www.BeautifulInternational.org for more information. We would be honored if you would join us and become a Beautiful Partner; your prayers and gifts are vital. Let’s make 2017 the year we bless more of the very ones who have the most impact on the family and communities – WOMEN!

“In India, November 14th is celebrated as Children’s Day. This is the anniversary of the birth of Pandit Jawaharlal Nehru, the first Prime Minister of Independent India. Pandit was very fond of children and believed they were the future of the nation, and since his passing in 1963, his birthday has been observed in this special way.

On Sunday, November 13th our Indian ministry team celebrated Children’s Day with joy in the Amravati Baptist Church. All of the children recited Scripture verses and the women sang special children’s hymns for the kids. The children were welcomed with gifts of smiley face badges and small tokens of love and sweets. The Grace Bible College Chapel was decorated with balloons and glitter, which the kids really enjoyed! Rev. Mohod, the Children’s Home Director, shared that it was very special to hear our children recite the Scripture verses. At the end of the service one of the children, Aakash, delivered a word of thanks to all who helped with the celebration.

This was a special time for all of the children in our Children’s Home, but especially for the new children who came to our home from surrounding villages in July. Many of these kids had not experienced a celebration like this before and we’re so very happy to provide such an environment for them. Jesus also celebrated and welcomed children when he said in Matthew 19:14, “Let the little children come to me, and do not hinder them, for the kingdom of heaven belongs to such as these.”

We’re so thankful to our sponsors for their special role in helping little children come to Jesus through prayers and financial support.

If you’re interested in giving lasting hope to a child in need, please contact Sarah Rieger, Executive Assistant for Sponsorships by email at [email protected]

Being in Iraq at this time as the battle for Mosul is raging is both concerning and reassuring for John and me. The reassurance we sense is that any and all of the refugee relief aid we as a ministry have brought to this area for the past 2+ years has been MORE than well-spent. We’re so incredibly grateful to many who have given and continue to give to this crisis through the ministry. Thank you for making a difference.

The concern is that with 3.2 million already displaced Iraqis and refugees from Syria, the new 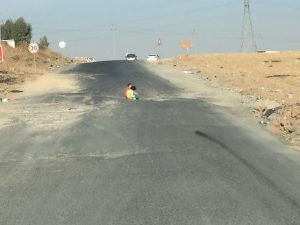 battle for Mosul has caused MORE refugees to pour out of the region looking for immediate shelter and aid. The crisis which seemingly couldn’t get worse – just did.

According to the UN High Council for Relief (UNHCR), the UN Relief Agency, since the beginning of the Mosul offensive on 10/17/16, some 47,730 more Iraqis have been displaced. On November 11, reports are that this number DOUBLED the previous week making that number over 95,000 in two weeks. As a comparison, this is more than the entire population of Redding, California. Imagine everyone in that city on foot fleeing.

Many we’ve spoken with here are estimating the numbers could reach over one million. This is a very, very sobering reality banging on our front door right now. There is a broader response being prepared by the government of Iraq and humanitarian organizations looking for options in the northern area of Iraq to support an additional 700,000 displaced Iraqis if needed. Teams are setting up new massive refugee camps to the east of Mosul. That is in addition to the 35-40 refugee camps already open and operating in northern Iraq. One of these camps alone is home to 65,000 people.

Other concerns – with reports of an unusually high number of female-led households, many are concerned about families being torn apart – either by the conflict itself or in the recent movement of these families fleeing the violence. Until the refugees are settled, no one really knows.

Children – many families are fleeing the Mosul area on foot which means many hours of walking. It’s clear that not all families are able to stay in tact. In one refugee camp east of Mosul, 50 unaccompanied or separated children were helped in the chaos last week.

Our response – As John and three others visited the two recently liberated towns of Karmalish and Quaraqosh yesterday, the empty streets, tunnels in living rooms, and thousands of bombed and burned homes, were an eerie greeting and a reminder of the enormous amount of work and opportunity facing us. We will share more later about how Indigenous Ministries is looking at partnering with nationals here in the the future with the rebuilding phase, but for now, we are helping refugees and meeting the needs they have.

The need is great and we will continue to minister to refugees here. For so many, this is the love of Christ in action they simply don’t expect to receive, since those left in Mosul have been primarily Sunni Muslims. Please pray with us for the families of Iraq who are leaving their homes right now in Mosul; pray for the children, the women, the men. Pray for the elderly, the sick and the unborn. Pray for the pastors. Pray for the relief workers. Pray for the coalition forces and yes, pray for the ISIS soldiers to come to Christ.

To donate to the Iraq Relief Fund, please go to IndigenousMinistries.org and click the Donate Button in the right hand banner and select “Iraq Relief Project” in the drop down.

We are rejoicing in the success of the Micro Finance Entrepreneurship Loans and Savings program in the Philippines. Participants are not only working hard to earn, but they are also learning to participate in God’s hope.

One such success story is Esmeralda. Along with her husband and six children, they once depended heavily on scavenging in the local dumpsite.  On a good day, their earnings were $1.50. However, Esmeralda participated in IM’s skills development program, becoming a manicurist/pedicurist, allowing her to earn an income and feed her family. But most importantly, it deepened her faith that God is active in her family’s life.

Her newfound hope led her to attend a government-funded cosmetology course. She was quickly hired by a hair salon and soon promoted to manager.  But Esmeralda didn’t stop there!  As a parent of one of our sponsored children***, she was able to participate in our Micro-finance Business Loan and Savings program. She and her husband opened a small home retail store; the family no longer has to scavenge.

Esmeralda is now president of the Loans and Savings program, teaching financial accountability and stewardship. She also leads Bible studies and participates in outreach. She, and other program participants, are role-models in the church and community encouraging and supporting one another in the Lord.

Become a catalyst for hope and help more families like Esmeralda’s by donating to the Southeast Asia fund; hope blooms into transformed lives for Christ. Thank you.

*** In January 2017 we are launching a brand new child sponsorship program in the Philippines with Resty and Mel Enguerra to support 50 children in the Payates Dumpsite they have been working with faithfully for four years.  $35/month is the cost to sponsor one child.

This Fall, Indigenous Ministries’ teams will be ministering in the Middle East. These vital meetings with our Global Church Planting Initiative pastors and other local area pastors teach, encourage and bless.

There are two ways you can engage: 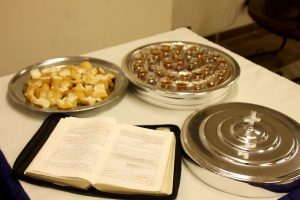 First, pray; because the spiritual darkness in this area is significant. Second, give generously to make it possible for more national pastors to attend IM’s conferences in their own countries. The current need is $5,000, which will be invested into the lives of hundreds of national pastors.

Beautiful International fall and winter women’s conferences are coming up in the Middle East and India in October and November. Our theme is “The Truth in Tea.” Please be in prayer for these vital meetings and our national leadership teams. To help prepare crafts for our women overseas, contact our office. Your donations to Beautiful are vital and continue to help women globally. Please join me in these exciting days of Harvest! 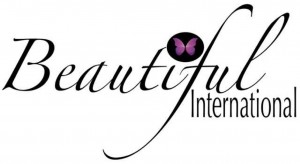 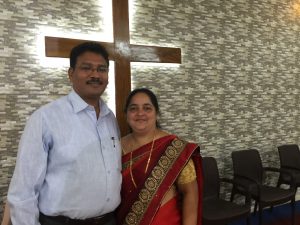 Rev. Himmat and Mercy Mohod, Director of the Children’s Home. We thank the Lord for their loving hard work and care for the children.

Our Children’s Home in India and director Rev. Himmat Mohod have both reached the 50 mark. Early this month we called to wish him a happy 50th birthday and coincidentally, the enrollment in the home has also reached 50; we’re so excited! Here’s how we’re helping more orphans with hope and help:

In May’s issue of The Liaison, I wrote that 13 additional children, most of whom are orphans, were coming to the Home, then in late June Dr. Cook was asked to take in 10 more orphaned and needy girls from a nearby sister ministry that sadly has closed its doors due to lack of financial resources. Our team in India and here in the Colorado Springs office prayerfully felt we couldn’t turn the girls away and now with everyone back for school, there is a much busier campus: we’ve gone from 27 to 50 children! We’re trusting the Lord to bring in resources needed to care for these children, first for sponsors for the new children ($35/month) and then for the additional housekeeping items needed.

The total need is $3,000, or, about $130 to get each new child “set up,” which 10 people partnering at $300 each would meet. Gifts of all amounts are appreciated and will be used to ensure each child is well cared for.

Click on the donate button and in the dropdown menu choose “Children’s Home Repair & Housekeeping Items,” and if you’d like to sponsor one of the children kindly choose “Children Sponsorships.” Thank you!