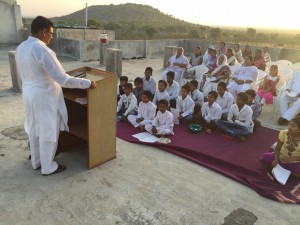 The sun broke bright and warm over the dry country side….when all of a sudden the crowd gathered broke the stillness with the shout… “Prabhu Ut-lah Aahe!!! Kharokahr Ut-lah Aahe!!! HE HAS RISEN, HE HAS RISEN INDEED!!!!!” Startled birds took flight from the hill opposite the rooftop we were meeting on.

My mind wandered across this great land of India that has been recipient of the greatest message ever known to mankind since before the end of the first century. Thomas, the Apostle was tasked with sharing the Gospel to India. Through the centuries, the Word of God has taken deep root into this land that the Lord loves. 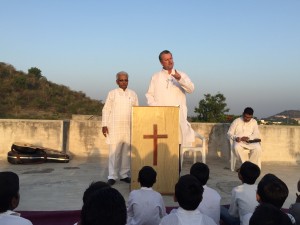 I also think of the centuries of outreach into this place of deep and great need… and the new churches planted as the result of IM over the last almost two decades of ministry….I think of one young man who is now a lawyer for the High Court in Nagpur, who trusted Christ as his Savior. Because of your participation, there are thousands of more voices who have taken up the cry HE HAS RISEN!!!!!! and in that, a matchless and priceless redemption has been accomplished. – Dr. John Cook

Ministry Opportunities
Contact our office for more information and to apply at (719) 302-3028.
If you are looking for VBS or AWANA projects, we have them!
First Easter, First Baptism, First Communion

SHIPPING CONTAINER DORMS: FROM PAPER TO REALITY IN 20 DAYS!
Scroll to top