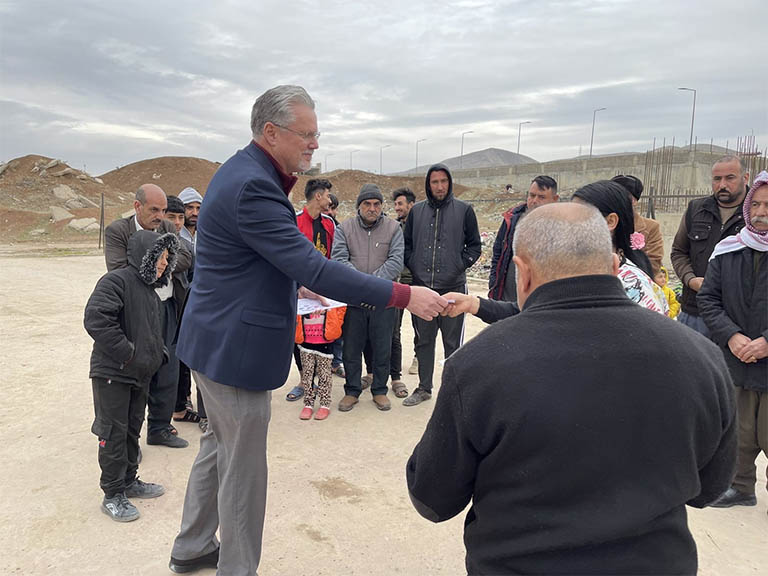 Last month we shared two new areas of ministry Indigenous Ministries is privileged to engage in N. Iraq. This article by IMI CEO, John Cook, details an outreach last month to a Yazidi refugee camp, one of the two.

The light of the new day broke with a biting cold, much too piercing to be outside, yet as we drove up to the Yazidi refugee camp, the men walked to meet us bundled in their warmest of both jackets and traditional full length coats. The wind caught their coats and headgear, causing everyone to hunch over and pull our clothes closer. Our pastor who has been working in ministry to the Yazidis in N. Iraq shared that just a few days before, a foot of snow was on the ground. With me that day was Craig Miller, IMI US staff and Fadi, IMI N. Iraq staff.

After the horrific violence of 2014-15 in which the Islamic State specifically has sought to annihilate this ancient people group, over 5,000 Yazidis were killed, 6,417 were kidnapped and hundreds of thousands are still displaced from their villages.

As the men came out to greet us, most of the rest of their family members stayed inside out of the cold. Besieged, their villages and homes razed to the ground, their daily life is now lived behind makeshift fiberboard walls and snow-ladened tarp roofs. Plastic and styrofoam window coverings were reinforced at every point as a buttress for the families inside against the cold wind. Stair rails made of recycled wooden pallets led to upper dwellings. Little faces peered out from behind doorless entryways to satisfy the curious minds of little children.

We had come to meet a dire need and share with the people a ration of 20 liters of kerosene per family to provide a small space with warmth and comfort within the makeshift shelters. Our pastor had shared with me that the weather turned to a deep cold 10 days before and several died as a result. He had called and asked me if there was some way that we could help these people he ministers to, and we were able to respond as the result of your heart in participation with Rapid Response gifts. With great appreciation, these families received coupons to present to a friend of ours with a fuel station in exchange for a 20 liter (5 gallon) fuel can.

This village is located on the northwestern part of Iraq, an area close to the Syrian and Turkish borders. It was in 2008 that I had the privilege of visiting Syria and the villages that I had been in were less than 15 miles away on the other side of that border. This is the land of the ancient kingdom of Assyria. The river that runs through this area, the Tigress, waters hundreds of thousands of acres of agricultural land that even to this day is a land of sheep and wheat. This is the Biblical land known as “The Paddan Aram” the place that Abraham sent his servant to find a wife for his son Isaac. This is the land of Rachel, Laban, Leah and Rebecca. The place were Jacob fled to escape his brother’s anger for the theft of the birthright, the place where the Lord blessed him, a land of sheep and wheat. Today, many of the people live as their ancestors did 3800 years ago. This land has been fought over for centuries by historic giants. In 2nd Kings 18, Scripture reveals that Shalmaneser the King of Assyria sent the Children of Israel to Hala and Habor who were captives from Samaria during the time of Hezekiah in 722 BC.

Here we stood on this ancient land, sharing the love of Jesus Christ with these people. People so torn from the devastation of the hatred of ISIS, and even to this day their homeland is a place hotly contested as to who owns it now. I was moved to see these Yazidi people receiving the gift that we were able to share in Jesus’ name. Weekly the pastor shares the Word of God with them and is spending time in their camps praying for them and encouraging them to turn their hearts to Jesus. 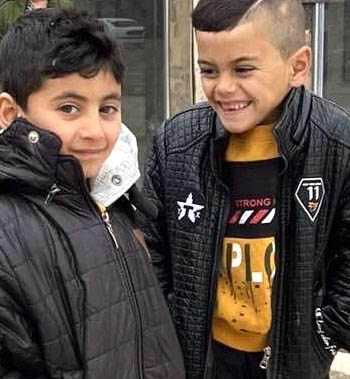 As a ministry, we have helped Yazidis in this region since 2014. I remember one of the men we had ministered to came to me and shared his prayerbook. Every morning as the sun comes up they begin their day with a prayer to Jesus the Christ. Spiritual seeds are growing as we are watering what others did years ago sharing the gospel with the Yazidis.

New Child Sponsorship Program with Yazidis: In response to need of these refugees and their families, IMI has opened up a brand new area of Child Sponsorship outreach. We announced last month that we were starting with 10 children and what’s exciting is that within hours of the email going out, five of these ten children were sponsored! Word got out fast, and you can’t image what an encouragement this was to our Iraq teams!

Available for sponsorship: Our teams are enrolling more Yazidi children who are available for sponsorship. Pray that the Lord of the Harvest will allow us to minister so as to build faith in Christ into the hearts of the people. Their response to our ministry? A number of the men have shared that it is only the Christians that care.

I want to thank those who continue to fund the Rapid Response Fund which gives us the ability to share in meeting the needs of people and also to share with them the Love of Christ. Thank you for your encouragement that you have brought to these precious people that Jesus Christ gave his life for. – John W. Cook, CEO

To sponsor a Yazidi refugee child, go to sponsor a child. In the note section let us know if you want a Yazidi child. Please also consider a generous gift to the Rapid Response Fund.

Ministry Opportunities
Contact our office for more information and to apply at (719) 302-3028.
If you are looking for VBS or AWANA projects, we have them!
BIBLE STUDIES HELP TEEN REFUGEES IN N. IRAQGBC Nears Accreditation!
Scroll to top