Iraq – With 37 “military points” in north Iraq, Turkey’s presence in the area has been felt by locals with continued shelling in areas close to the border. In July 2022 a resort site near Zakho was shelled and 9 tourists killed. Although Ankara was blamed, Turkish officials denied any involvement. Either way, the people of this region continue to suffer – all peoples: Kurds, Turks, Syrians, Assyrians, Armenians, Yazidi’s to name a few. Pick an ancient language, it’s likely being spoken in this area.

This month in Kurdistan has been full of many good things, as well as very difficult ones. The tragic death of Christian worker on November 8 in Baghdad is a reminder that another area in this region is in a giant tug of war politically and spiritually. It’s this stigma that mis-represents much of Iraq and her people.

Hope is hard to come by for many in the northern regions of Iraq. This last month Dee and I have had the privilege of sharing life together with those living very tough lives. We sat with a family living on the border of Turkey and Iraq who endure almost nightly shelling not too far from their home. They are all traumatized and yet have no place to go, so they continue on. Coping as best they can, they were hospitable and kind, and we noticed humor was one way the parents soothed their children. Their son (his picture is on page 2 with Dawood) is so proud to be in our Child Sponsorship Program and is doing quite well in math. They are so grateful for the ministry’s assistance. We also met with a woman who has been broken by life’s trauma; she is disabled, a mother of seven young children and just two years ago became a widow. They too hear the nearby shelling. We are assisting her through the local church and child sponsorships. 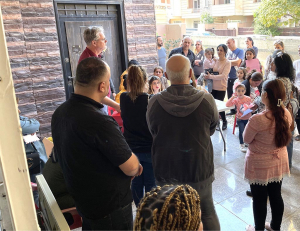 One of IM’s food distribution this month

We also sat with a Yazidi family who thanked us for the heating oil that we distributed in February this year through our Rapid Response Fund. The father made the 20 liters of fuel (just over 5 gallons) stretch for 40 days to keep his family warm. This made a very large impact in their family and helped them make it through a difficult winter. They are refugees from Shingal, with no home to return to, so they are doing the best they can in a massive UNHCR refugee camp that is rumored to be closing soon. There were many other families we sat with and listened as they shared their stories. Over and over we heard, “thank you for coming, for caring, for listening.” We are grateful for our sponsors and donors who entrust us with funds to assist these families in their struggles.

I also the privilege of praying with Government officials who are dealing with thousands of transitory refugees and needing to focus government resources to stretch beyond its capability. Gratefulness overshadows each area that we share in this place of great need. We held food distributions, preached in churches, Dee held women’s meetings and launched our new Middle East Theological College. A word of special thanks to Craig Miller for his teaching at METC. We pray for God’s grace and blessing on this land and people.

Ministry Opportunities
Contact our office for more information and to apply at (719) 302-3028.
If you are looking for VBS or AWANA projects, we have them!
Greatest Need Year End FundraiserGrace Bible College Christmas Celebrations
Scroll to top