Myanmar: a Country in Crisis 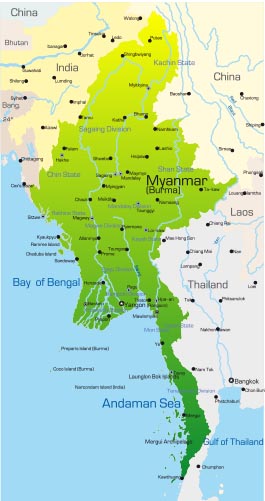 The dawn began to break on February 1, 2021 over Yangon, Myanmar (Burma). The city awakened to the sounds of military trucks and government vehicles making their way through the wide boulevards and narrow streets of the city on their tight-lipped assignments. As they reached their destinations, members of the NDP, or the “National League for Democracy” were rounded up and arrested.

This was following the Myanmar November 2020 elections where the NLD swept the elections in a landslide victory. The armed forces had backed the opposition parties and demanded a re-run of the votes claiming extensive fraud, despite no evidence to support such claims from the election commission. The coup took place just as a new session of parliament was set to open.

Ms Suu Kyi, one of the officials arrested, has been held under arrest in an unknown location since the coup. She is facing various charges, including possessing illegal walkie-talkies, violating COVID-19 restrictions during the November 2020 election campaign, and most recently, breaking a colonial era official secrets law. The latter charge could lead to a potential prison sentence of 14 years.

The military known as the “Tatmadaw,” launched the coup to overthrow the new government and seize power returning to the military dictatorship that Myanmar has known for over 40 years. Along with taking into custody Suu Kyi who is the equivalent to the Prime Minister the President, U Win Myint was also arrested. All of the governors of the seven states of Myanmar were also detained. Since February, hundreds of protesters have died at the hands of the military.

I could not help but think of those we have ministered to in this country over the past years. There are several pastors and wives who faithfully serve the Lord and the growing community of Believers in the country we have partnered with in ministry. And God has blessed; many have come to faith Christ.

Upon hearing of the military seize of power, I called some friends there, pastors, who are in harm’s way at this time. As I spoke with one pastor and his wife, she shared, “In my poor mind, I thought that in the US, there are so many strong praying people who love the Lord. With all of our prayers it did not happen as our hope (The way the US elections went). It is so difficult, but even now we know that God’s plan is in place. But in our Myanmar only few are Christian; how can God’s plan work when there are so few of us to pray?” In our March issue of The Liaison, we focused on the sacrifice that Elijah used to turn the hearts of the people back to the Lord. But remember that Elijah, even in the company of the prophets of Baal, was unmoved in his confidence in God and what he would do.

Elijah repaired the altar of the Lord with 12 stones, laid the wood on it, and then the sacrifice. What he did next was unexpected given Israel had been in a three year long drought; Elijah took precious water and poured it over the sacrifice in abundance. It represented an impossible blockade that would ensure the sacrifice would not burn; the sacrifice was inundated with water. But what did Elijah do? He turned his face towards heaven and prayed.

What could not burn, or ignite on its own was offered to God for His response. At the end of his prayer Elijah said, “Answer me, O Lord, answer me, that this people may know that you, O Lord, are God, and that you have turned their hearts back.” Turn their hearts back to what? Back to the Himself. In Ezekiel 36:26 the Lord said, “I will give you a new heart and put a new spirit in you; I will remove from you your heart of stone and give you a heart of flesh.” As our country and the world cycles in turmoil, the Lord is drawing all to Himself. He has a plan to give everyone an opportunity to trust Him.

Elijah was so confident in who God is, he taunted the prophets of the false god Baal, and when it came time to step into the arena, Elijah’s prayed. He asked God to reveal himself as he was bringing his people back. There is coming a day where people will say “The Lord he is God!!” But for some it will be too late as the judgment will fall. They will acknowledge but it will be through clenched teeth.

As we watch the world struggle trying to find answers to virus strains, coups, questionable elections, political unrest and lockdowns, it’s time to turn our hearts from this world and seek what is clearly coming. The return of Christ is near, and friend: if you have anyone that you need to share Christ with, ask them permission to share your steadfast faith with them. And pray for them.

As my conversation came to a close with the Pastor and his wife in Myanmar, she said to me, “Pastor John, people need to see the Christ! Time is too short and we have a big job. Pray for us as we set our country’s need aside and share Christ.” The last communication I had with them I heard gunfire in the street outside their home, and after that the internet was shut off. – John Cook

Intercede for Myanmar, for those who are in the midst of this political and religious crisis. Pray for wisdom, courage and opportunities to share Christ.

Pray for those who have been put into prison for Christ and the Church.

Pray for the persecuted Church of Christ. Pray for hearts to be open to the gospel in Myanmar. Pray for the government and for the wise and compassionate to rule. Pray for peace in Burma.

Ministry Opportunities
Contact our office for more information and to apply at (719) 302-3028.
If you are looking for VBS or AWANA projects, we have them!
Responding to Children in the Middle East With Medical NeedsJournal Notes From Iraq…
Scroll to top