When Open Doors released its 2021 list of Top 50 Countries Where it is Most Difficult to Follow Jesus we weren’t surprised to see the countries IMI works in, once again, close to the top of the list. We are often asked for updates on persecution in India and the Middle East, and what needs are represented for ministry. Below are some updates:

India – #10 on the list is the world’s second largest English speaking country where the persecution level is listed as “extreme” for Christians in the context of religious nationalism. In a country where the constitution guarantees freedom of religion, the hold that extremist Hindus have in government is only growing, casting a deepening shadow on the future of the Church. Outbreaks of violence this month in Maharashtra were very close to home; Grace Bible College has been on lockdown for reasons of safety. IMI has ministered in India since 2003 in church planting, helping, training and supporting national pastors. 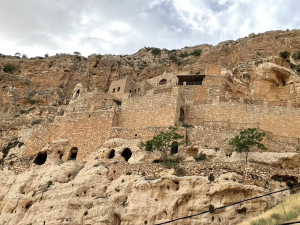 The Mar Mattai Monastary in N. Iraq, established in 363 by hermit Mar Mattai fleeing Roman persecution, was used during the recent war with ISIS as a place of refuge by Christians.

Iraq – #11 on the list, is a country whose people live in a fragile peace and Christians are discriminated against under the majority religious oppression. Post-war trauma, spiraling economic and health challenges make daily existence for many, especially refugee families, a great struggle. Incidents of violence against Christians are on the increase.

Indigenous Ministries is reaching thousands each month with aid, educational and medical assistance and spiritual encouragement through local churches. The Child Sponsorship Program continues to grow in the number of children enrolled, as well as those who responding to the gospel. Pastors and churches face numerous challenges in this post-war country.

Syria – #12 on the list, is still in the midst of a 10 year civil war. Daily life is complicated and expensive. According to the World Bank, the Syrian economy has lost 60% of its pre-war strength, leaving families struggling to find jobs and keep up with inflation which reached 200% in 2020. Persecution of Christians is extreme and many have fled and still are leaving the country as refugees. Indigenous Ministries is assisting ministry partners in Syria and welcomes Syrian refugee children and families into our Child Sponsorship Program in Iraq. One of our biggest challenges currently is the need for more sponsors for the unsponsored children in our program. Getting these children sponsored will provide our teams the ability to reach out to more Syrian refugees – thousands of which are living in extremely difficult circumstances in Iraq; many of their children are unable to attend school because they now live in deep poverty and cannot afford simple school supplies.

Egypt – #16 on the list, Egyptian Christians also face persecution on a daily life level which Open Doors describes as “dictatorial paranoia.” Christian widows struggle with poverty and providing their children with an education.

Indigenous Ministries welcomes widows and their children into our Child Sponsorship Program in an effort to provide the love of God, stabilization and belonging, as well as regular food supplies and educational opportunities for the children. An especially impactful sector of ministry is providing vocational and upper level education opportunities for the children who are aging out of our Child Sponsorship Program.

IMI provides training, encouraging and support to local pastors in their labors. We’ve seen this program become very successful in the lives of the families enrolled, and with the churches and pastors IMI has engaged with for over 13 years. The national Egypt Pastors’ conference has expanded to encompass pastors throughout the Middle East.

2. Barrett Alexander, February 18, 2021, “Syria’s Economic Collapse and Its Impact on the Most Vulnerable,” www.csis.org

Ministry Opportunities
Contact our office for more information and to apply at (719) 302-3028.
If you are looking for VBS or AWANA projects, we have them!
Christmas for the Children FundraiserYEAR END GREATEST NEED FUNDRAISER & PREPARING FOR 2022
Scroll to top