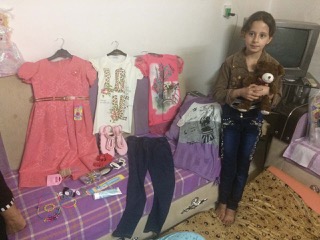 The flood of families that are streaming out of Mosul are bringing with them horrific accounts of forced conversions to Islam, from their traditional Christian faith. Subsequently, once forced to convert, most have been monitored by ISIS (the Islamic State) to watch their attendance at local mosques.

I sat with a 17 year old boy who, along with his mother, had been captured by the Islamic State in 2014 and taken to Mosul. He was imprisoned several times, beaten repeatedly and forced to put on a suicide vest with a remote detonation device. I encouraged him to find comfort in the Word of God, and he turned to me and said, “Jesus is no longer my god!” This may seem surprising to hear, but when someone has lived under that extreme pressure and in fear for their life, it isn’t a unusual reaction.

So what is our response? Exactly what we as a ministry are engaged in; to meet some of the physical needs of their lives as the Lord brings opportunities. I was recently reading in the book of Acts as the Church in Antioch began to care for and bring relief to the Church in Jerusalem in the midst of a famine. The council of Jerusalem recognized that the giving of the Church in Antioch was evidence of the validity of their salvation; and they were the first to give in the midst of their own suffering.

The day this family left Mosul, coalition forces were fighting street to street. When the battle line passed over their house, their home was finally released. Iraqi forces came to their front door, and under the pressure of the exchange of gunfire they were taken to a troop carrier. Now the transformation from refugees in the middle of Islamic State control to a refugee family just outside that control has gone from one nightmare to another, and despair has taken hold. The local Church provided a place for several refugee families to live, but now there is mistrust between them and the background Christians because they changed their religious status.

This is an opportunity for us who are the Western Evangelical Church to reach out with the Love of the Lord Jesus Christ. Remember the Lord Jesus said in Matthew 25:35 & 36, “For I was hungry and you gave me something to eat, I was thirsty and you gave me something to drink, I was a stranger and you invited me in, I needed clothes and you clothed me, I was sick and you looked after me…” (NIV)

This photo, right, is of a girl who, along with her family, was captured. She was six years 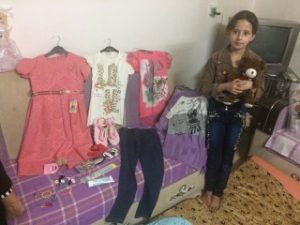 old at the time and she’s nine now and is proudly standing next to the clothes and toy that you’ve help provide for her. The $125 that was spent to clothe the whole family has been a big blessing to them. Thank you for reading this, for praying, and for your caring heart.

Ministry Opportunities
Contact our office for more information and to apply at (719) 302-3028.
If you are looking for VBS or AWANA projects, we have them!
GBC Library Update