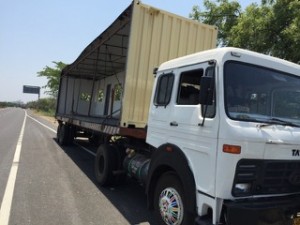 dormitory building making its way from Mumbai to Amravati on a trailer pulled behind a lorry (Indian semi-truck). Then the call came that the transport had been stopped just outside of town. It had arrived during the “No Entry” rule (certain times of the day when freight transports aren’t allowed through town). We jumped in the van and sure enough – there was the lorry on the side of the road. The temperature was just over 102 and the wind was hot. But that could not stop us from checking out what we had long awaited! 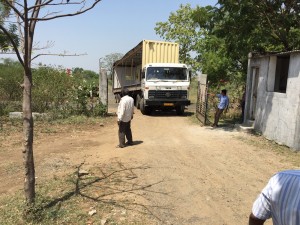 As the time was completed and we started to make our way, the Road Traffic Officers from each department came to stop the progress as taxes needed to be paid and permissions given. At last, with final clearances in hand, we made our way in a convoy of the lorry (with half of a dormitory on its back), and several cars and motorcycles to the Grace Bible College property.

The lorry made the sharp turn onto the property, drove through the 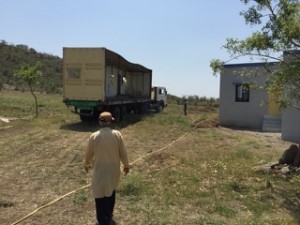 gate and growled its way to the new, freshly poured foundations. 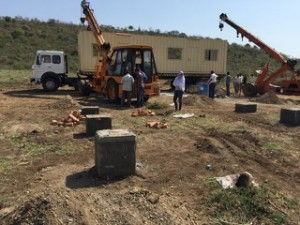 The call went out for the cranes to come and lift the building off the trailer.

Within a matter of an hour, the building that had been a shipping container, was placed, leveled, and transformed by its new location, to become the first dormitory for Grace Bible College. Then as the week continued, the second building came (in two pieces) and it too was transformed.

The septic system was constructed and the application for the electricity line submitted, and the water 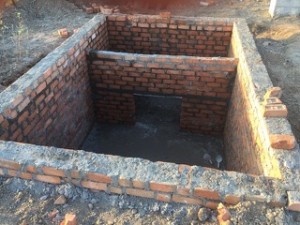 Within 20 days, this project has gone from lines on paper to real dorms with windows and doors, flooring, lights, fans, and functional bathrooms and showers; now prepared to receive the first 40 boys for school the next semester!

How can I describe my feelings? I’m filled with a mixture of overwhelming gratitude to the Lord and to each of you who have shared to make this project a reality. Words cannot describe the sense of awe at what has been accomplished…. Yes, there are still needs and the next phase of buildings is needed, but the goal to get the school on the campus has been accomplished. How I praise the Lord for this 11 year answer to prayer.

Ministry Opportunities
Contact our office for more information and to apply at (719) 302-3028.
If you are looking for VBS or AWANA projects, we have them!
Easter Services – India

IN 20 DAYS! Dedication of Dorms!
Scroll to top