The “Secret” Tragedy of Millions of Sudanese Refugees in Egypt

SUDANESE REFUGEES POUR INTO CAIRO: Sudanese flow into Egypt each and every day seeking to escape the violence and famine back home only to find the familiar faces of hunger and poverty awaiting them in Cairo. Although the Egyptian government has granted them an escape, life is still very difficult for these refugees.

Why are so many Sudanese in Egypt and what are they fleeing?  Sudan was once the largest country in Africa. From 1899-1955 Sudan was jointly ruled by Britain and Egypt until Sudan gained its independence in 1956. For over 30 years, Muslim influence grew and in 1983, Islamic Sharia law was introduced in the north with broad resistance in many regions including the south where many Christians lived. In 2003, conflicts in the Darfur region began and raged on for years. Tragedy spiraled out of control; two civil wars in Sudan have resulted in the deaths of over 1.5 million. In 2011, South Sudan gained its independence after years of violence and war, settling only some of the issues. Today, 60% of the population of claim Christianity as their religion and yet violence continues to mark areas. Many of the tensions in the past have been over religion, land and resources for food and water, sadly the situation seems to only have worsened.

The war in Ukraine is exasperating a massive, desperate growing hunger crisis that is developing in a number of countries including South Sudan and Egypt in 2022. The United Nations: over 60% of the population in South Sudan are facing hunger this year in addition to massive flooding, drought and violent clashes. In April 2022, the UN declared that more than two-thirds, or, a staggering 7.7 million, of the South Sudanese population was in need of humanitarian assistance. Overwhelming statistics, to be sure, and is there a sure and solid way we can help? Yes there is. Read on. 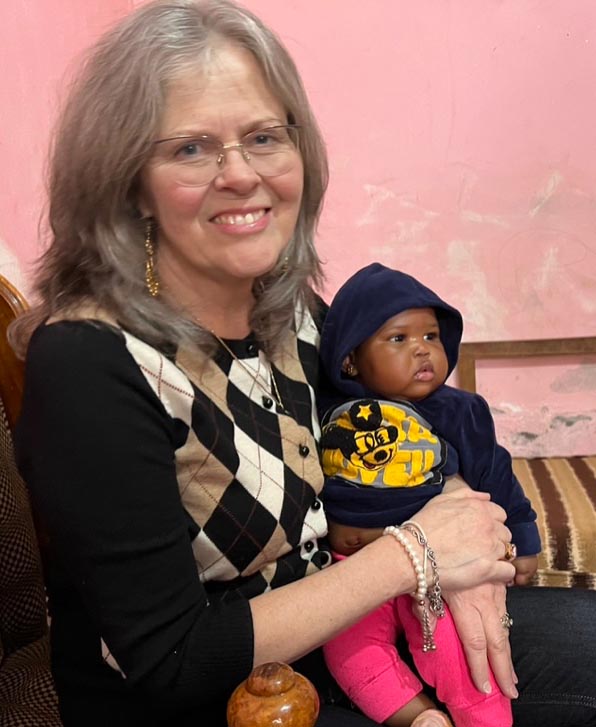 Dee Cook with a Sudanese baby, born to a refugee mother

HOW INDIGENOUS MINISTRIES IS RESPONDING: With a proven track record of successful ministry in Egypt since 2006, Indigenous Ministries has worked mostly in the Upper Nile region assisting thousands of persecuted Christian Egyptians and Muslims. In 2021 CEO John Cook felt God was leading us as a ministry to respond to the growing needs among Sudanese and Syrian refugees in Cairo, and we began phase one; planing the expansion of Indigenous Ministries’ ministry to refugees in Cairo. Cairo is much more expensive than villages where our other teams live, so budgets have been reconfigured. Food, transportation, medical care and housing costs are two and three times of that in villages. In early 2022, we began phase two with training a brand new core Egyptian team working together in this mega city. In June we moved another couple to Cairo and then in July our team began taking registrations of children into our program!

We are excited to share with you that we’ve welcomed our first 20 Sudanese half orphaned abandoned children in our brand new Cairo Child Sponsorship Program (CSP). Our ministry team in Cairo are very well prepared and have a heart for reaching these refugees for Christ.

We are also partnering/working with another Sudanese Christian team who run a school for undocumented Sudanese refugee children, which is giving a place for the first several hundred children in our Cairo CSP to go to school. Without documentation and registration with the Egyptian government, refugees are ineligible to attend government schools.

These children are fatherless and have been unable to attend school due to lack of funds, uniforms, backpacks and school supplies. This year we will be able to help these children go to school thanks to your kind and generous gifts to our Backpack and School Supplies Fundraiser. But we need sponsors!

SPONSOR A CHILD, CHANGE THE FUTURE: No one can predict what will happen to the Sudanese and Syrian refugees, however, based on our 24 years of experience with child sponsorships, we CAN absolutely predict that children who are sponsored will have a better future. Why? They receive consistent food, love and attention, they and their families hear the gospel, the children are able to receive an education. Each one of these children have the ability to impact their families, communities for good. We believe God is going to use several of the children in our Child Sponsorship Program to help change future of countries in the Middle East. Will you pray about sponsoring two or three of these precious children?

Ministry Opportunities
Contact our office for more information and to apply at (719) 302-3028.
If you are looking for VBS or AWANA projects, we have them!
Middle East Pastors’ & Church Leaders ConferenceHow You Can Help a Sudanese Refugee in Cairo!
Scroll to top