THE URGENCY TO INVEST IN TRAINING NATIONALS! 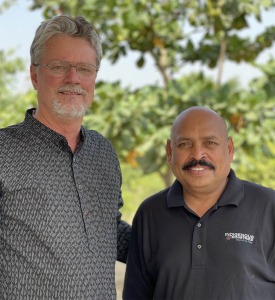 Above, John Cook with GBC Principal Pramod Tantarpale in India last month. Dr. Tantarpale was trained at Calcutta Bible College (which John’s grandfather co-founded) and has been serving in Christian education ever since.

There is an ongoing debate as to the importance and effectiveness of either sending US workers (missionaries) overseas or sending a national from their own country. There is a point that some would make saying that a U.S. worker is working for and is accountable to US oversight, and there are strong points within this discussion. Other considerations:

The cost of sending a U.S. worker in both time and in financial resources are high and challenging. The average cost of a U.S. worker to serve overseas is comparable or higher than it costs to live in the U.S., and in many places such as Europe, cost of living can be as much as 40% higher. The time investment also is high in that it is taking many up to 5 years to achieve full support. The time to learn the language is another 2 years.

But what about a national? In many countries, the cost for living for a national is from $200 to $1,000 monthly, and no language training, visas, airfare, or shipping of household goods to another country needed. The time it takes for a U.S. worker to lead their first person to Christ can be as long as ten years in very difficult places, where the time for a national is around two weeks.

When you think of the cost comparison of getting a U.S. worker overseas verses the cost of training of nationals, the big differences come to light. The resources to support one U.S. Christian worker for a year is equivalent to the cost of training 65 nationals for one year, or, 21 nationals for three years at Grace Bible College. A Bible college graduate who begins into serving the Lord at 25 and retires at 70 gives his or her community 45 years of ministry service and impact, and after retirement, his or her impact and legacy continues.

In many countries in the 10-40 window, a U.S. Christian worker may not be allowed to minister in interior areas. Using India as a reference, interior ministry is significantly challenging with restrictions (not advisable for non-Indians) and additional language barriers. While learning Hindi, the national language is important, it may not be enough. Most tribal areas have their own language making it necessary to learn another language for effective ministry.

Doesn’t it make sense to bring a person from the interior, or tribal areas, give them solid biblical training, and send them back to their own people?

How is this working? Very successfully. Over the years of the ministry of Grace Bible College we have seen 16 tribal groups represented through our graduates, several have gone on to work on the Jesus Film translating the story of Christ into their own tribal languages and also those close by. Others are church planting, pastors, children’s workers, women’s ministry leaders, involved in discipleship and training other nationals in remote areas. In larger cities, GBC alumni are ministering to children caught in human sex trafficking. Other graduates are going into the mountain areas and effectively sharing Christ in remote villages. I remember one of our Grace Bible College graduates whom I met by chance as Dee and I were driving though the interior in Maharashtra. He saw me and I stopped the car and we greeted each other. He asked me to come with him to four villages because he had 38 people ready to follow the Lord in baptism. I was so encouraged to see him and hear this blessing. He had planted these four churches.

I’ve seen it over and over; when a tribal trusts the Lord Jesus he or she become the sweetest and most dedicated follower of Christ. Tribals are committed to reaching their own people for the Lord and have a real heart for following through with sharing their faith.

Within Grace Bible College currently we have students from seven tribal groups represented. Being one who has been generationally connected to ministry in India personally I am very excited to share this with you, as each one represents some major movement forward into an unreached people group. These tribes represented today at GBC are the Kond, Korku, Pardhi, Mouchi, Koli, Bhil, and the Banjarah. The tribals represent the grass root fabric of India yet also represent the highest percentage of the unreached. On page one we’ve listed the populations of these tribals and how many of them have been reached with the gospel.

We are making this a continued priority of reaching the unreached. But the need is urgent and every year we wait, people go to a Christ-less eternity. It is your love for the Lord and His ministry that gives us the opportunity to continue to impact these people for Christ – thank you. – John W. Cook, CEO

Ministry Opportunities
Contact our office for more information and to apply at (719) 302-3028.
If you are looking for VBS or AWANA projects, we have them!
GBC Campus is Getting a Facelift!WHY DOESN’T INDIA HAVE MORE CHRISTIANS?
Scroll to top